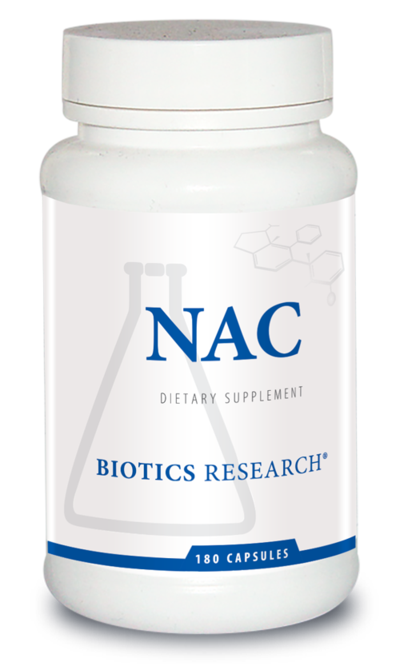 NAC supplies N-acetyl-L-cysteine, a derivative of L-Cysteine, which is more stable and better absorbed than L-Cysteine. NAC functions as a potent antioxidant. As the precursor to glutathione intracellular synthesis, it is essential for the synthesis of glutathione. Glutathione is a critical component of the immune system, as it is an important intracellular water-soluble antioxidant. As part of this function, glutathione plays a vital role as the cofactor for the antioxidant enzymes glutathione peroxidase and glutathione transferase. Glutathione is also important to the liver, as the liver utilizes it for drug detoxification. As a metabolite of cysteine, NAC plays an important role in detoxification, and is hepatoprotective. NAC functions in protecting cells against oxidative stress, and contributes to important bodily reactions. As such it is a part of the defensive mechanism toward potential carcinogens, as well as against DNA damage. The role of NAC in acetaminophen toxicity is widely documented, however, NAC contributes to other protective mechanisms as well, including drug conjugation and excretion, peroxide and free radical destruction, maintenance of the redox state of NADPH-NADP, acid-base balance, and the synthesis of sulfated compounds. NAC also plays a role in the development of the central nervous system. There have been numerous studies using NAC, with COPD, particularly amongst patients who smoke. Utilizing NAC in smokers with chronic bronchitis showed a significant reduction in the number of positive bacterial cultures in these patients. {Riise GC, et al. Eur Respir J.1994 Jan; 7(1):94-101.} Another study utilizing NAC indicated potential benefits for chronic bronchitis, resulting in a significantly lower exacerbation rate in patients administered NAC, compared to placebo. {Rassmussen, JB & Glennow, C. Eur Respir J. 1988 Apr;1(4):351-5.} Since it easily passes through cellular membranes, NAC has been shown to be readily absorbed. It is also resistant to enzymatic breakdown.

This product is gluten, dairy and GMO free.

One (1) capsule each day as a dietary supplement or as otherwise directed by a healthcare professional.KEEP OUT OF REACH OF CHILDREN.
Save this product for later
Display prices in: USD